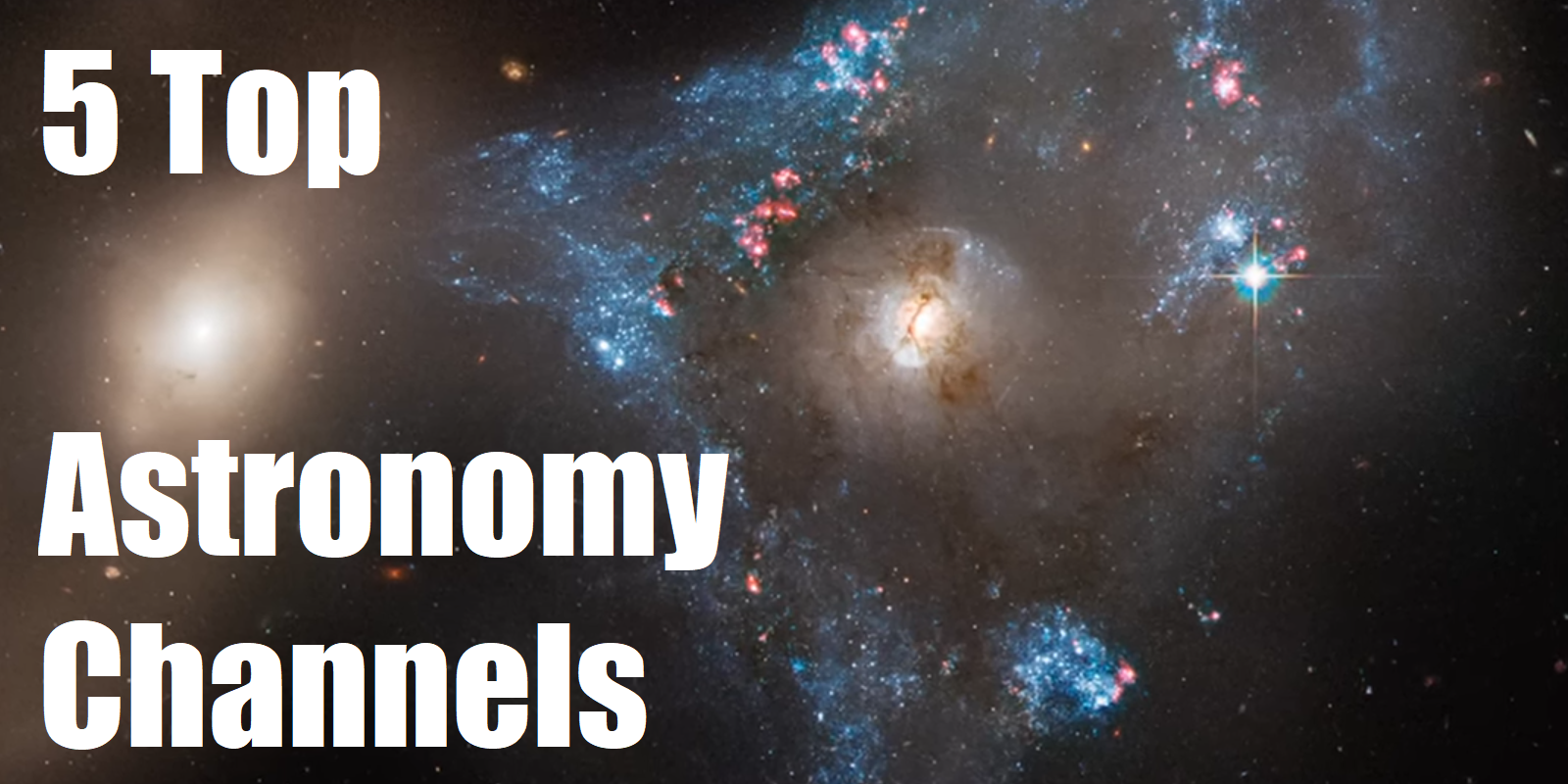 Seeking out new worlds and new Youtube channels about those worlds? Here are some of the best YoutTube channels covering astronomy

In this article we’ll be going over channels covering objects in outer space and sometimes the probes used to study them, but you may also be interested in our article on spaceflight and rocket science for channels covering how we get to space rather than what's up there.

While NASA Kennedy launches probes and satellites, NASA Goddard is in charge of them once they are up there. The NASA Goddard channel is the official channel for the people in charge of Hubble, our Mars probes, the continuing Voyager missions, and the recent James Webb telescope.

And while their frequent videos highlighting the latest deep-space images from Hubble are very exciting, I was particularly fascinated by this video from one of their Earth observatories discussing the detection of COVID lockdowns using environmental satellites to distinguish levels of nitrous oxide and carbon dioxide in the atmosphere. It is amazing to think Astronomy can be used to study social phenomena:

Watch their channel for the latest findings from NASA or check out their recommended similar channels on Channel Galaxy here.

While Astrum is a general astronomy channel occasionally covering topics such as black holes and quasars more than any other channel here Astrum focuses on objects in our own solar system with their high production value videos.

Long-form videos with high production value animations and expert informative commentary is a format common to several of the best channels on Astronomy, but where channels like SEA and Cool Worlds study theoretical and distant phenomena Astrum focuses more on the local neighborhood of planets.

In addition to their interesting videos explaining how astrogeological processes contributed to the formation of the solar system they also sometimes discuss the engineering of the probes NASA sends up to explore these worlds.

But don’t let the proximity of the objects Astrum discusses fool you into thinking more exotic topics are more interesting. The natural processes which produce the variety of planets and moons we have in our solar system are truly fascinating.

Have you ever wondered what would happen in case an asteroid were detected on a collision course with Earth? This Astrum video goes into depth on NASA’s mission to experimentally alter an asteroid’s orbit as part of plans to develop a response to potentially threatening asteroids:

Find more channels directly related to Astrum here or go on to watch them on YouTube.

SEA is a channel concerned with extremes. The most, the earliest, the last; these are the topics this channel focused on cosmology answers.

Their well-edited videos use animations of large interstellar objects like galaxies and galaxy-clusters to explain the largest scale objects in our universe, where they come from, and what they will be at the end of time. More than any other channel featured here SEA addresses the questions of origins and ends of stellar objects and the Universe itself.

This video on the Cosmic Microwave Background Radiation is a great example of their use of animations to illustrate the concepts of cosmology they are discussing. When discussing the white-hot soup of undifferentiated photons and matter at the beginning of the Universe I’ll probably always get the image of SEA’s illustrative white-swirling animation in my head:

Check them out on YouTube or explore their related channels here.

Doctor David Kipping runs both the Cool Worlds YouTube channel and the Cool Worlds astronomy lab at Columbia University. He specializes in detecting planets outside our solar system (exoplanets), particularly ones in the zone cool enough to sustain liquid water.

On his channel you will find professional quality videos explaining the science of exoplanet detection as well as reviewing what we know about these planets outside our solar system. He also gives special attention to questions about the possibility of extraterrestrial life, but is always careful to maintain an objective and scientific approach to these questions, remaining within the boundaries of established science.

In this video he discusses how unique or not unique the Solar System is among known exoplanet systems. He explains how the Kepler spacecraft surveyed a section of sky to find thousands of planets orbiting other stars. I won’t spoil it, you’ll have to watch to find out how the Solar System compares to our discoveries:

Anton Petrov puts his master’s degree in Science Education to good use reviewing the latest discoveries in astronomy and astrobiology on his channel. While other channels on this list may touch on topics of astronomy research Anton will dive into individual papers on his channel to provide an easy to understand review of the latest discoveries in space and space science.

Perhaps most unique are his videos delving into the microbiology requirements of life living outside of Earth or the Solar System. Anton’s discussion of protein chemistry and other biological topics set him apart from many other astronomy channels which focus more on the physics of space and the non-living stuff we find up there.

But astrobiology isn’t the only thing that distinguishes him. His coverage of the latest findings in astronomy hot-off-the-presses of the most prestigious academic journals is rare on YouTube.

Check him out on YouTube or find more related channels on our recommendations.

And while you’re here make sure you click around on the Channel Galaxy recommendations for these channels. We couldn’t get to every Astronomy related channel in our database of over 30,000 YouTube channels, so you’ll want to explore the Channel Galaxy to find loads more!

Or maybe you’ll branch off into your other related interests. We’ve already mentioned our guide to rocket science channels but we know from our recommendations that Astronomy fans are also likely to be interested in deep sea exploration. The EVNautilus channel featured in our Deep Sea Exploration guide directly links to the NASA Goddard and Astrum channels featured in this guide. So be sure to check out our guides on those topics as well.