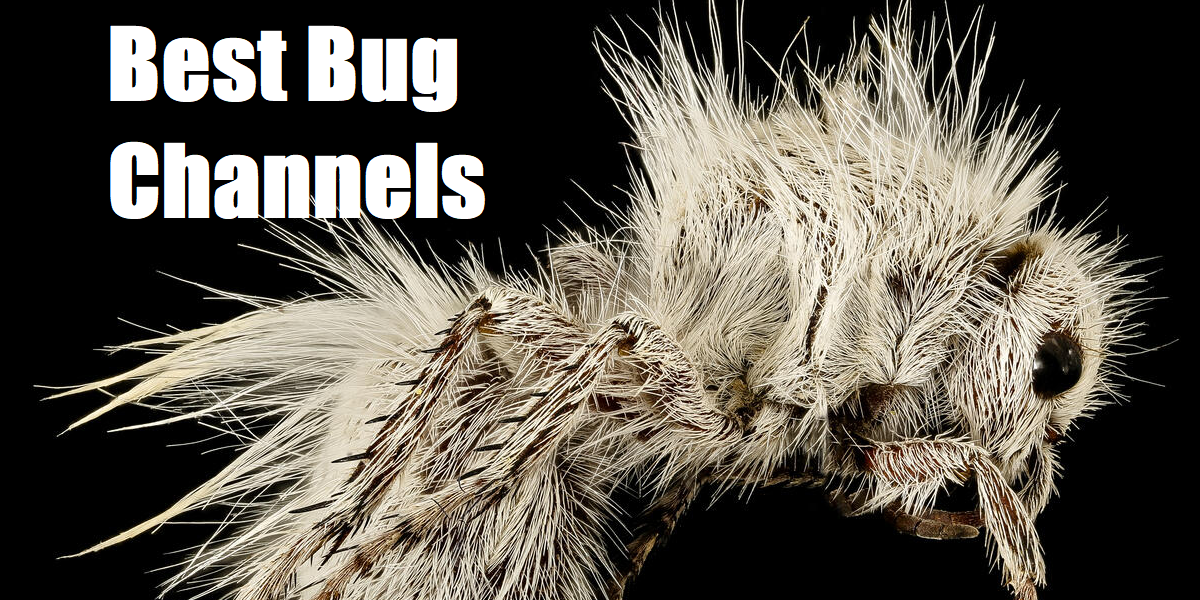 What are the best channels to find interesting videos on insects, arachnids, and other creepy crawly critters?

If you’re a fan of bugs on YouTube you may have already heard of the largest insect focused channel, AntsCanada, but this channel is a must-include on a list like this. AntsCanada is the company of the same name’s official channel.

For example: in this video we see the earliest stages of an ant colony. Normally the queen ant is nearly completely sedentary and is served by the thousands of workers of her colony but this colony is new and only had one worker.

We can watch rare behavior of the young queen as she uses “ant milk” to feed her first workers herself in addition to watching her assist new workers in emerging from their pupae (cocoons). Normally the queen will be fed by workers and never participate in ordinary mundane colony tasks like stripping off new-worker cocoons.

The clear plastic enclosures allow AntsCanada to use their high quality cameras and get good shots of tiny hard-to-notice details like an ant using their tongue to clean another ant. Check them out on YouTube if you don’t already know why they are the largest insect channel or look at their Channel Galaxy page to find smaller channels like them!

PBS Digital’s KQED uses high quality macro-photography equipment to produce some of the most spectacular videos of small animals on the internet. While occasionally featuring small amphibians, reptiles, and other vertebrate animals the channel mainly focuses on insects, spiders, and other arthropods.

Unlike many of the hobbyist-run channels on YouTube, Deep Look creates high quality well-edited videos of these creatures in the wild rather than captive specimens. They couple this high production value video with expert informative commentary.

In this video Deep Look uses its high quality cameras to capture a whip-scorpion, or vinegaroon, while using its defensive spray. The cameras are able to slow the action down enough that we can see the tips of the two glands the whip-scorpion uses to spray the liquid peek out from between the creature’s armor plates for an extremely brief moment:

Check them out on YouTube or look at their Channel Galaxy page to find more channels like them!

His channel exemplifies the best of small hobbyist channels. His large private collection of tarantulas are kept in his custom designed studio/warehouse where he makes videos of molting, breeding, and of course feeding behavior of these interesting and often colorful large spiders.

And while mainly displaying his spider collection he will also feature the occasional other small creature, such as mantids, centipedes, scorpions, or other small animals.

In this recent video we see him feed a number of his tarantulas. It is often surprising how powerful these small creatures seem when they lunge for their prey with their thick muscular limbs:

Watch more of his stuff on YouTube or look for similar small hobbyist channels on his Channel Galaxy page:

The German hobbyist known simply as “Bugman” posts videos of mounting dried beetles as well as footage from his private collection and insect hobbyist conventions but by far his most interesting are his videos from expeditions to Borneo.

Bugman specializes in beetles and has some spectacular videos of wild specimens in the Bornean rainforest. If you don’t already know, Borneo is a tropical island off the south coast of Asia that is habitat for some of the largest insect species on Earth.

While focusing mostly on beetle species he will occasionally make videos for other kinds of insects. For example: his still image slide shows of wild specimens he encounters on his Borneo expeditions include videos on butterfly and katydid species in addition to beetles.

There are certainly plenty of videos on his channel of large beetle species like Chalcosoma Moellenkampi (rhinoceros beetle) both in captivity and the wild, but I think this video of a wild Bornean Paterodrilus Paradoxus or “trilobite beetle” is possibly the most unusual land creature I’ve ever seen:

He is a great example of the smaller creators you can find on Channel Galaxy. Check out his page here:

Richard from the Tarantula Collective uses his professional level video shooting and editing skills to produce what must be the most slick and high production value tarantula videos on YouTube.

It is no wonder Tarantula Collective is one of the fastest growing channels in this space. The camerawork, equipment, and editing rival that from the larger Deep Look channel discussed earlier and produced by KQED’s professional PBS studios.

This feeding video is a great example of how Richard uses cuts and video slow-downs to seamlessly display only the most interesting shots of tarantulas taking down prey while avoiding less interesting footage and screentime for moving enclosures or retrieving food items. And while he will offer some commentary his focus is mainly on the action with tasteful background music as the majority of the audio.

The Tarantula Collective channel mixes these standard behavioral videos along with advice videos for hobbyists and interviews with important members of the insect and arachnid hobby community.

View his video on YouTube or find out how Tarantula Collective is linked to other channels in our Channel Galaxy web:

This is a special bonus channel on this list. Dr. Clint Laidlaw is a biology PhD with a specialization in biology education. His channel mostly focuses on reptiles, as you may guess from the name.

His content focuses on describing care requirements for various exotic small animal pets. Although reptiles make up a majority of this content he also will make videos on other exotic animals like bengal cats or, importantly for this article, insects and arthropods.

This video of velvet ants contains probably the most visually spectacular insect species on YouTube in this author’s opinion. The Thistledown Velvet Ant is covered in long bushy white hairs that give them the appearance of little walking puff balls. They are meant to mimic a plant seed found in their native habitat, but it also makes them look like cartoonishly cute versions of bugs:

Watch more of his videos on YouTube or check out his recommended similar channels to explore more reptile and exotic pets content creators:

Of course we couldn’t get to every bug channel in our database of over 30,000 YouTube channels, so click the links to the Channel Galaxy recommendations to find more insect and arachnid related channels.

If you’re interested in insects and arachnids you might want to check out our article on Deep Sea Exploration channels to find videos featuring even more exotic and alien creatures. Dark Den and Deep Look both directly connect to EVNautilus, an undersea exploration channel featured in that earlier article. And keep exploring the Channel Galaxy!