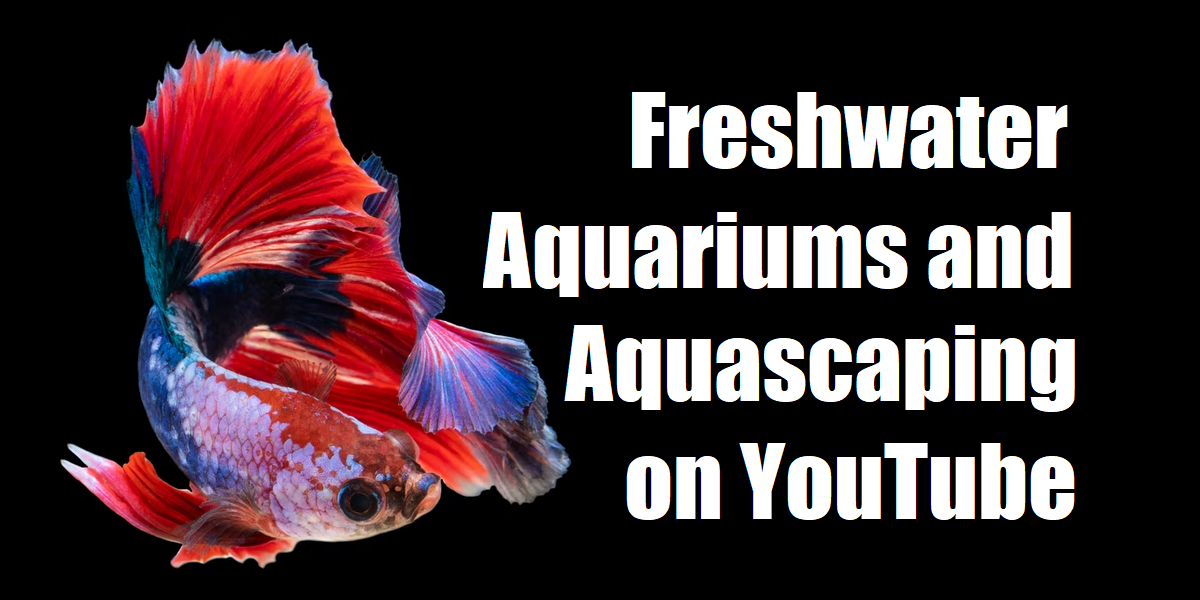 Betta fish are known to be "fighting fish," but not many know they are generally docile with other fish unless housed with another Betta as discussed in this video by KGTropicals. Photo credit to Kyaw Tun for Unsplash.

Get Deeper into the Freshwater Aquarium and Aquascaping Hobby

The next stop on our safari through the animal regions of YouTube are Freshwater Aquarium channels. If you are looking to find new YouTube channels to help take your aquascaping aesthetic to the next level, keep a low-tech tank with no algae, or just learn the basics of caring for fish Channel Galaxy can help you find it.

These five Freshwater Aquascaping and Aquarium channels are a great place to start discovering more YouTube channels in this area, but be sure to click through to the Channel Galaxy list of recommendations for these channels to discover dozens more.

The largest freshwater fish channel on YouTube is named after the unusual captive bred cichlid variant known as the flowerhorn. In addition to the vibrant coloration and large size of many cichlid breeds, the flowerhorn has a unique bubble-like protrusion from its forehead, giving them their striking appearance.

It is not difficult to see how this channel’s style of excellently edited macro-lense footage of freshwater animals attracts a large viewerbase. The lack of a voiceover and inclusion of tasteful piano and xylophone makes the videos have an unobtrusive relaxing atmosphere. While the channel is named after Foo, there are several other freshwater tanks with diverse inhabitants featured.

And while Foo the Flowerhorn really is a beautiful sight, this video capturing a feeding session for brine shrimp is perhaps a better showcase of the close-up macrophotography featured on this channel. I found it very interesting to be able to see the shrimp use tiny forelimbs to tear off small pieces of food to bring into their mouthparts; I had no idea they were so intricate:

But I also highly recommend checking out the eponymous flowerhorn by visiting him on YouTube after seeing some of the other aquarium channels linked to him here on Channel Galaxy:

Run by Cory McElroy, Aquarium Co-Op located in Edmonds WA is the freshwater fish retailer with the largest YouTube presence, although this channel isn’t about selling their products. Rather, Cory produces frequent aquarium care tip videos which just happen to occasionally showcase the store inventory or fish specimens from Cory’s private collection.

They are perhaps best known for their spectacular puffer fish specimens, one of which is featured on the logo for their channel. While normally freshwater fish are not as intensely or vibrantly colored as their counterparts in the saltwater aquarium hobby, the puffer fish kept at Aquarium Co-Op are definitely an exception to this rule.

The mbu puffer can grow to a very large size, up to 26 inches. They have a vibrantly yellow skin and on the top half of their body there is an intricate geometric pattern of darker scales woven into the bright yellow. Perhaps their most striking feature is their large buck teeth which give them the look of a strange underwater beaver.

This video featuring Murphy the mbu puffer is a great showcase of his vibrant yellow coloration as well as the surprisingly docile nature of this large fish. Since the mbu puffer nearly exclusively feeds off hard shelled molluscs like clams, they can easily be kept with schools of smaller fish, like these rummy nose tetras:

Check them out on YouTube or see their related channels here on Channel Galaxy:

John and Lisa Hudson of KGTropicals, located in King George VA, are another retailer offering advice to hobbyist on YouTube.

Their professional high quality videos fit a style seen in other exotic pet niches on YouTube where shots of a knowledgeable presenter alternate over well-edited shots of fish and aquarium habitats as the presenter narrates caregiving advice. The quality of their production and style of presentation is very close to that of Tarantula Collective and Wickens Wicked Reptiles mentioned in our articles on insect channels and reptile channels.

John and Lisa select topics which can be covered in relatively short and concise videos which rarely go past fifteen minutes in length. Their talent for presentation makes these shorter videos perfect for moments when you can’t commit to an hour long tank-setup demonstration or shop tour.

This recent video on colorful freshwater fish options to stock a tank is a great example of their content. They can cover this short topic with a video under twelve minutes but pack a lot of information about the easy of care and details for each species they cover, all while providing plenty of close-up shots of the colorfully beautiful fish they are discussing:

Subscribe to them on YouTube to get notifications about their frequent live streaming and find more freshwater aquarium channels like them on their Channel Galaxy page:

MD Fishtanks makes videos focusing on the arrangement and wholistic composition of a tank to maximize aesthetic beauty. While he will sometimes make a short video with general tips, the vast majority of his content is long-form videos covering the construction and set-up of a new aquascape in a fresh tank or one that he has decided to tear-down and re-scape.

Each video spends much of the time discussing the layering of gravel, aquasoil, and sand substrates before moving onto the placement of rocks and deadwood, all focused around creating a pleasant view of the tank and inhabitants. Plant selection is discussed in detail, with special attention to a combination of aquatic plants which will be both aesthetic and assist in controlling algae growth.

Animal inhabitant selection is discussed in general terms, touching on the relative importance of algae eater species and supportable population, but the specifics of particular fish species are not frequently discussed on this channel. MD Fishtanks provides a much more wholistic approach to tank setup and other channels may have more specific fish-focused content.

This video is a great example of the exotic tank-setups with which MD Fishtanks experiments. Unlike a more traditional setup which would include filtration and potentially CO2 injectors, here MD Fishtanks creates an “ecosystem tank” which needs minimal maintenance and equipment, all in an extremely small 7 gallon fish bowl. The video describes how the balancing of substrates, plants, and fish load can sustain a healthy aquarium with minimal algae growth.

Find him on YouTube or see his related channels here on Channel Galaxy for more aquascaping focused content.

Chris Wang brings YouTube-Gamer energy to the freshwater aquarium hobby. Much like the biggest English language channel, PewDiePie, FFT videos are primarily Chris cracking jokes and commenting in reaction to other online videos about fish tanks and aquarium care. He even calls it “Fish Tank Review” and claps on the words, mimicking PewDiePie’s “Meme Review” video format.

And while Chris may have a non-serious comedic style that is highly entertaining, he also brings a lot of legitimate knowledge about the hobby which he shares during these humorous videos.

This is a very typical Fish Tank Review video from FFT. His quick edits and humor keep a fast pace throughout the video, making a very entertaining watch: In the video he briefly comments on fish tank builds found from Reddit or elsewhere around the internet, in addition to photos of aquariums sent in to him by his viewers. This one also features one of his frequent co-hosts, his cockatiel Milli:

In addition to these Fish Tank Reviews he will occasionally make tank construction videos. Find him on YouTube to see his recent coffee pot build or check out his Channel Galaxy page to find more related channels:

And while you’re here make sure you click around on the Channel Galaxy recommendations for these channels. We couldn’t get to every freshwater aquascaping and aquarium related channel in our database of over 30,000 YouTube channels, so you’ll want to explore the Channel Galaxy to find loads more!

Or maybe you’ll branch off into your other related interests. We’ve already visited reptile channels and insect channels earlier on our safari through channels featuring exotic animals and pets on YouTube. Clint's Reptiles, featured in our Reptile channels guide directly links to MD Fish Tanks and Fish For Thought channels featured in this guide. So be sure to check out our guides on those topics as well.