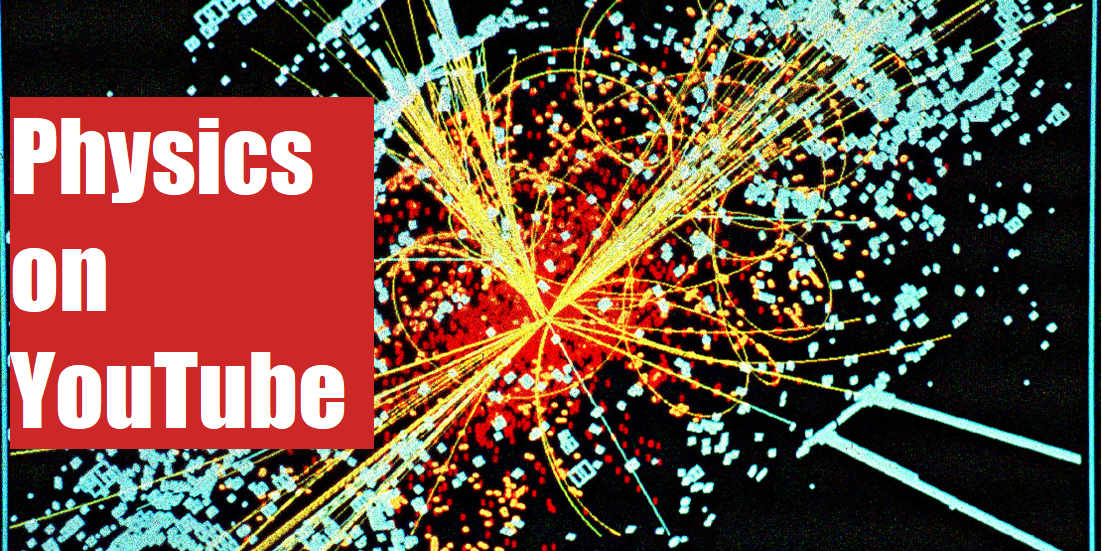 Simulated Higgs Boson decay from CERN. The lines represent the possible paths of particles produced by the proton-proton collision in the Large Hadron Collider's CMS detector while the energy these particles deposit is shown in blue.

YouTube offers many science education channels guiding the curious through the mysteries of the universe. From channels offering a standard collegiate level course in physics to others exploring physics insight to everyday phenomena to channels keeping up with cutting edge research, YouTube has creators covering this area from a range of angles. Discover these channels here on Channel Galaxy.

In this article we’ll be going over channels covering physics science, education, and demonstrations, but you may also be interested in our article on astronomy for more channels covering cosmology and astrophysics.

If you want to learn introductory undergraduate physics you have several options on YouTube, like DrPhysicsA or Physics Explained. While these channels may be right for some learners, Dr Matt Anderson’s introductory physics channel is distinguished by combining an exciting visual style with short easy to digest lessons.

Dr Anderson’s San Diego State University Physics department uses “Learning Glass” to allow the professor to draw with colorful markers on a transparent pane between themselves and the students. This gives his lectures and problem examples a more eye catching visual element to accompany the professor’s expert explanations.

Unlike some other Physics lecture channels, each course module or subject is broken down into ten to twenty short videos, making it easy to digest. Many of these videos are little more than five minutes in length making them perfect to review in random idle moments or when you don’t want to commit to an hour-length lecture.

And while lectures and problem sets make up a majority of his content there are occasional physics demonstrations featured. This video uses a guitar and a smartphone to demonstrate Harmonic Motion, the subject of module 14:

Check out their YouTube channel or find similar channels here on Channel Galaxy:

Unlike traditional physics education which may focus on mathematical equations to illustrate how forces balance in some situation, Khutoryansky will create custom simulations such as hundreds of animated small balls representing air or liquid particles to illustrate such phenomena as how pressure equilibrates in a fluid dynamic system, how current flows through a circuit, or how brownian motion causes osmosis between substances.

His animated illustrations of physical processes go well beyond the diagrams other physics lecturers may scribble on the margins of a whiteboard or put into a powerpoint slide. He runs full simulations of these processes using his own custom software to generate animations.

This recent video on fluid dynamics provides an incredibly intuitive explanation of how a hydraulic press operates on the same principles as a pulley or ramp:

While there may not be any channel making high quality custom simulations like Khutoryansky, you can find other physics and mathematics education channels linked off his Channel Galaxy recommendations here, but be sure to visit him on YouTube to see his full catalog of videos.

Dianna Cowern of the Physics Girl channel leverages her MIT physics education to provide a down-to-earth exploration of physics in day-to-day life and ways physics is used to explain mysteries on Earth.

While occasionally making videos on standard YouTube physics fare like Black Holes and dark matter, and also having a series of AP Physics preparation videos, the vast majority of Physics Girl’s content is demonstrations of how Physics can be used to understand objects and phenomena in our everyday lives on Earth.

Among the physical phenomena examined in the short, high production value videos on her channel are the way drag on large areas of thin ice sheets created mysterious rock patterns in a desert valley, how reflected light is concentrated to run power turbines in massive solar plants, or the fascinating science of antibubbles.

This video explains the physics of how a boiled egg or certain specifically shaped objects will rise when spun on their side to orient itself up and down in a phenomena known as precession:

While originally focused on explaining physics notation to a lay audience the Sixty Symbols channel now is more focused on discussing current issues and problems on the cutting edge of academic particle and astrophysics in one-on-one interviews with working physicists.

Recent topics have included experimental measurements of the crystalline structure of neutron stars, the scientific history around the discovery of the photon, or the speculative possibility of toroidal (donut-shaped) planets.

On this channel Brady Haran brings his production style of personal interviews with expert academics interspersed with appropriate simple visual aids like short animations, graphs, or props. Regular presenters on the channel include the University of Nottingham’s Ed Copeland and Mike Merrifield along with Oxford’s Becky Smethurst.

This recent video on the results of particle accelerator experiments meant to study muons explains how the discrepancies between the measured results and the predictions made by our current Standard Model of Physics may represent a discovery of new laws of physics previously unknown. Truly the cutting edge of research:

CERN is the location of the largest and most powerful particle collision facility to ever exist. They are at the world forefront of particle physics and have a YouTube channel giving an intimate insider’s view of the most advanced scientific facility on Earth. Located on the border of France and Switzerland, CERN brings world-leading experts from across the globe together to probe the deepest questions about reality and our universe.

Their YouTube channel goes into depth offering exclusive footage and background on the feats of engineering necessary to produce the science, like a video detailing the use of pressurized air pumped through pads to float 3 million lbs sections of the detection array while it was being disassembled for maintenance.

Other videos focus on the historic international collaboration necessary to create the facility in 1954 or past scientific achievements made at CERN prior to the construction of the Large Hadron Collider.

But perhaps most interesting are the videos detailing current experiments and investigations from the experts at the facility who are presently working on these deep questions of physics. This video is the first in a series detailing how the Large Hadron Collider was used to detect the Higgs Boson. The series gives an easy to understand intuitive explanation of how the signal of the Boson was distinguished from the background noise of random electromagnetic fluctuations presented by Piotr Traczyk, an expert working at the LHC himself:

Subscribe to CERN on YouTube to stay up to date on the latest discoveries or check out their related channel suggestions here on Channel Galaxy.

And while you’re here make sure you click around on the Channel Galaxy recommendations for these channels. We couldn’t get to every Physics related channel in our database of over 30,000 YouTube channels, so you’ll want to explore the Channel Galaxy to find loads more!

Or maybe you’ll branch off into your other related interests. We’ve already mentioned our guide to rocket science channels but we know from our recommendations that Physics fans are also likely to be interested in spaceflight and rocket science. The Everyday Astronaut channel featured in our Spaceflight channels guide directly links to the Physics Girl and Physics Videos by Eugene Khutoryansky channels featured in this guide. So be sure to check out our guides on those topics as well.